The Birth of A Ministry

New Foundation Apostolic Ministries, Int’l. is called of God to be a beacon to the town of Bowie, Maryland, its surrounding cities and throughout the world. In October 1987, while visiting Greater Morning Star Pentecostal Church in Washington, DC, Bro. Joseph Marcus heard a powerful anointed message spoken by Pastor Charles E. Johnson. The message, “Tell My Brother Hell is Real,” so moved this young man that he was compelled to obey the Acts 2:38 command. After water baptism, Bro. Marcus prayed to receive the Holy Ghost, at which time God spoke to him, calling him to preach His Word. Under the training and mentorship of Bishop Charles E. Johnson, he was taught the Apostolic Doctrine; and in the years that followed, he was taught to work in many areas of ministry. 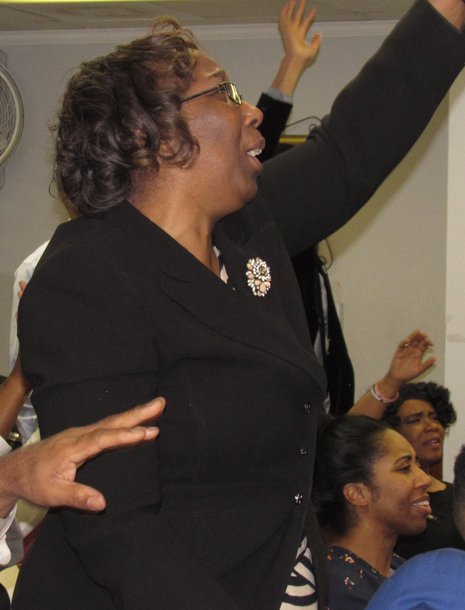 Also, it was here at the Greater Morning Star Pentecostal Church that Bro. Joseph Marcus met and married the love of his life, Sis. Nestle Davis. Together, they became prayer partners, seeking the will of God for their lives and the ministry that they were called to do.

Thus, in October 2001, the Lord revealed in a Vision, an area in which He ordained before the foundation of the world. This would be the place where He would draw men and women of every nation and people. After a season of prayer and fasting, a great burden fell upon Brother and Sister Marcus to move forward to fulfill their call. With no financial means to start; the Lord opened a door, where they began bible classes. Lives were touched and many heard the Apostolic message. This was just the beginning of what God had in store.

Then, in October 2002, the Lord spoke again and said it was time to begin services and time to move. By faith in God and a series of miracles, a free door opened for the start of New Foundation Apostolic Ministries, Inc. There the Lord began to pour out His Spirit and the Glory of God was seen. Souls were added to the Church and there came another need for space. God spoke to Pastor and First Lady Marcus, saying “Open your eyes and see.” Then, God, being faithful, quickly led them to a third door. As New Foundation accelerated its outreach efforts, the Lord worked with us and the blessing of souls being filled with God’s promised gift necessitated yet another move. In prayer, God spoke again, saying: “Don’t be afraid; it’s time to be blessed.”

As usual, God provided the fourth time for His church, and in less than two months we renovated and moved into this facility in April 2008. From its inception in a classroom at the Bowie Library to our present location here on Ninth Street, we have tried to follow the leading of the Lord. Thus, New Foundation is growing spiritually and numerically and God, alone, is getting all the Glory.

WE’VE BEEN BLESSED BY THIS MINISTRY

You Can Be Too!

Henceforth, New Foundation’s ministry arms are reaching across this country into others, causing a wonderful harvest of souls. Presently, with the help of the Lord, New Foundation has harvested souls from California, Louisiana, South Carolina, New York, Mississippi, Maryland, Virginia, Washington, DC, Liberia, Nigeria, England, Ethiopia; as well as our home base here in Bowie, MD. Many souls, young and old, have been baptized in Jesus name and filled with the Holy Ghost. Miracles of healings of tumors, deafness, back spasms, kidney disease, liver disease, cancer and the like have been accomplished by the power of God, through the restoration and function of the Gifts of the Spirit. God has brought us a mighty long way and it is just the beginning of what He has in store for New Foundation Apostolic Ministries, Int’l.

To God be all the Glory for the things He has done and shall do!